FRMCS - The successor of GSM-R and key enabler for rail transport digitalization.

Since the late 1990s GSM-R has become the de-facto standard for telecommunication services and a key building block within the European Rail Traffic Management System (ERTMS). With the increased need for more throughput, higher capacity and flexible deployment options the UIC in close cooperation with the European Union Agency for Railway (ERA) has initiated working groups and specification activities to define the successor of the GSM-R radio communication system deployed on rails, called Future Railway Mobile Communication System.
The FRMCS vision is to cover mission-critical railway communications by enabling an on-board mobile communication system for railway operators.

The key attributes of the new 5g-based system are aligned with the 3GPP architecture and cover:

FRMCS is also included as one of the so called game changers in the upcoming revision of Commission Regulation (EU)planned for 2022 to act as key enabler for the future ERTMS and railway digitalization. Hence FRMCS is currently in the standardization phase in the relevant 3GPP and ETSI groups to become compatible with harmonized bands made available for GSM-R (900 MHz) and others defined by ECC/CEPT.
Once available, railway community would in fact benefit from FRMCS products based on the most performing commercial standards available, in terms of both functions to be performed as critical application for railways and of efficient use of the spectrum.
Kontron Transportation has been a key contributor for GSM-R and is actively pursuing the same role for FRMCS to drive activities and engage in ETSI TC RT and 3GPP SA standardization groups as well as other initiatives created by UIC, ERA and other European stakeholders. 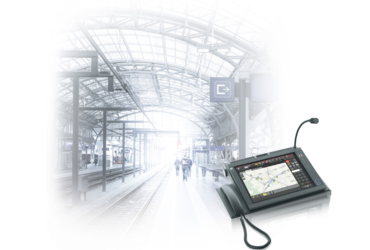