Internet of things: are the usa outpacing europe?

The Internet of Things is widely expected to become the central innovation driver in the years to come. Its future economic value will be enormous. This view is shared by US technology research firm Gartner in the latest edition of its annual report on the Hype Cycle for Emerging Technologies. Assessing the maturity of popular topics in technology, the current report classifies Digital Business Technologies – which includes IoT as well as Artificial Intelligence Technologies – as Innovation Triggers. According to Gartner experts, the IoT and related technologies are still well away from their peak. Eventually, they will fundamentally change the ways we live and work. So much for theory, but what is the practical situation? Analysts for IoT market research leader IoT-Analytics.com have examined 640 IoT projects currently run by companies all over the world. The result: Most of today`s IoT projects take place in industrial environments (22 percent) or in the context of Smart Cities (20 percent). This doesn`t come as a surprise, because both have been considered attractive fields for IoT since its beginnings. Not surprising as well, the majority of all IoT projects are realized in Europe and the Americas. There are some striking differences between these regions, however. 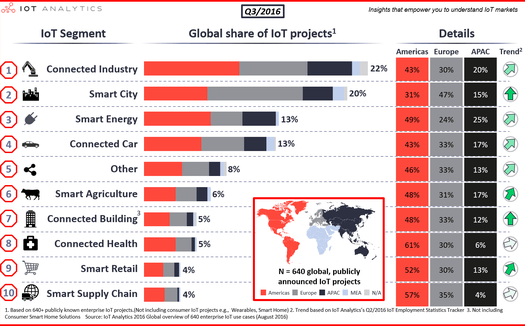 43 percent of Connected Industry projects included in the study were being realized on the American continent, only 30 percent in Europe. Does this mean that Europe is in danger of falling behind in Industry 4.0, a crucial field for IoT?

Luckily for Europe, the picture changes when it comes to Smart Cities. Here, the continent is on top of the list with just under 50 percent of all IoT applications. The Americas are second with only 31 percent. How can this be?

The Smart City has already been a priority for many years on the agenda in EU politics and companies. As early as 2011, Guenther Oettinger – then EU Energy Commissioner, today the Commissioner for Digital Economy & Society – announced the beginning of the European Smart Cities Initiative. The ambitious project was to consequently support Smart City projects in Europe with a special focus on reducing energy consumption. From this perspective, the leadership position in the field of Smart Cities may have more to do with government funding for a traditional European topic – environmental protection – than with a real technological vision. So no reason to sound the all-clear, it seems.

The Americas – Leader in all other Areas

The European Smart Cities advantage cannot hide the fact that the US and their neighbors in the south are leading the field in every other category. When it comes to Smart Energy, even Asia performs better than Europe despite the former surprisingly weak rankings and the same is true for Connected Cars. This is surprising, with the automobile industry traditionally being a very important player in Europe. It seems as if Europe even needs governmental help to realize what IoT could do for one of its key industries. This makes car manufacturers’ initiatives in this area even more important. Kontron itself actively supports the field Connectivity. Still, there is much more that has to be done in a European context.

Europe in Danger of Falling Behind

Similar analyses could be made of almost every other area of use for IoT. Take Connected Health as an example. Only 30 percent of the projects realized around the world are European – 61 percent come from the American continent. Traditional data protection concerns may be a partial explanation. However, it seems as if European companies have not yet fully realized the wide potential of IoT in general.

Of course, new technologies should be met with healthy skepticism. Connected Systems are vulnerable to cyber attacks and the security of IoT applications is a central issue. But even today, there are security solutions that make unauthorized access virtually impossible. Our Kontron Security Solution Line is one example for a solution that can be easily integrated into every application scenario.

Do Not Miss the IoT Race

IoT is a game changer, its positive technological and economic effects cannot be denied. Accordingly, European companies should go from theoretical enthusiasm to broad practical application; otherwise they risk falling too far behind their global competitors. Luckily, there is no need for that. We are here to help!