Industry 4.0 – Step by Step Towards a Modern Enterprise

Digital transformation is going strong. This is the key message from the latest German Industry 4.0 Index by consultancy firm Staufen which, for the third year in a row, surveyed 277 German companies on their levels of digitalization. Two years ago, only 16 percent had direct experience. By now, the number has climbed to roughly 40 percent.

The future of industrial production relies on the smart factory. A key technology, it is an important success factor for Germany as an industrialized nation. The German government came to the same conclusion in its High-tech Strategy initiative. Its goal: German innovation-leadership in the years to come. The term Smart Factory describes a vision of a production environment in which machines and logistics systems largely organize themselves without human interference. The technological basis of Industry 4.0 is the Internet of Things (IoT), which numerous experts hail the Fourth Industrial Revolution – and rightly so. 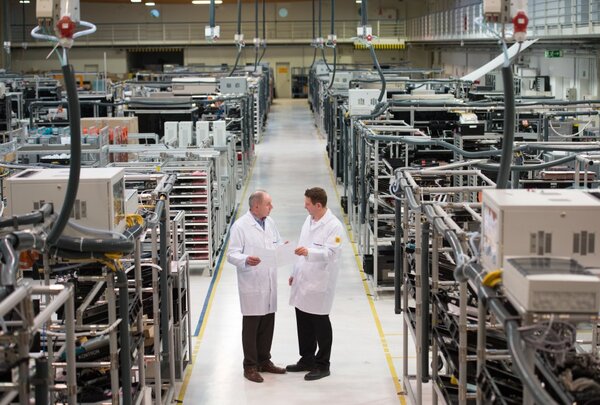 The Vision in the Real World

Industry 4.0 has arrived on the drawing boards of most German industrial companies (85 percent), according to the Staufen study. Compared to the previous year, the number of companies that have already taken their first steps has almost doubled and now stands at seven percent. Around one third of respondents have by now realized their first isolated smart industry projects while 42 percent are in planning or testing phases. A mere 15 percent said that smart factory did not play any role in their strategic planning. Germany, it seems, has already arrived in the industrial future. However, it will undoubtedly take some time until smart factories will be the industrial production standard. This in turn holds many opportunities for early and consequent Industry 4.0 adopters.

Industry 4.0: a New Way of Thinking

Industry 4.0 is a completely new approach that affects all development stages of a product or service. Companies have to go through a process of rethinking their value chain to enjoy its full digitalized potential. Traditionally, the focus of Industry 4.0 had been on production. Since 2016, however, internal sectors such as Marketing, HR, Controlling, Procurement, as well as executives have been catching up. This suggests that corporate culture is now widely accepting Industry 4.0 as a holistic approach. In research and development, around 44 percent of the companies that took part in the survey already have Industry 4.0 elements in place or plan relevant measures in the near future. One quarter of the respondents uses Industry 4.0 principles in sales or plans to do so shortly. Frequently, after-sales models drive digitalization and networking as they add to companies’ portfolios services along the full machine lifecycle. In the end, intelligent products open up completely new ways of creating value where classical industry approaches ended with the completion of the sale. Industry 4.0 it becomes abundantly clear is growing from isolated production implementations into a connected corporate philosophy across specialized departments.

Step by Step Through Digital Transformation

But digital transformation also presents challenges to companies. From a technological, organizational, but also from a human resources perspective. Old structures that have been growing within companies for many years are in desperate need of modernization. With this in mind, it does not come as a surprise that most companies choose to go step by step through the lengthy and complex process of revisiting and, if necessary, re-organizing existing structures. New facilities and locations are planned and built from scratch according to the Industry 4.0 concept. This is where Kontron’s IoT philosophy comes in play. We support our customers in making their existing infrastructures ready for the digital future with new, IoT-ready systems.

Our strength lies in standardized embedded computing solutions, the central nervous system of every Industry 4.0 application. We create complete solutions that can be applied flexibly, allow for individual IoT models, and meet the highest security standards. Naturally these are planned and developed individually according to customer wishes and requirements. Kontron solutions are based on industry standards, the development of which we help shape ourselves. Quality, durability, and standardized form factors are main characteristics of our product portfolio. This enables us to not only guarantee that our products perfectly support existing customer systems, but allows the design of the architecture to be open for new, future applications. Rebuilding an existing system into a modern, IoT-ready infrastructure thus becomes a much easier task. We are here to support your journey into Industry 4.0 – step by step, one revolution at a time.