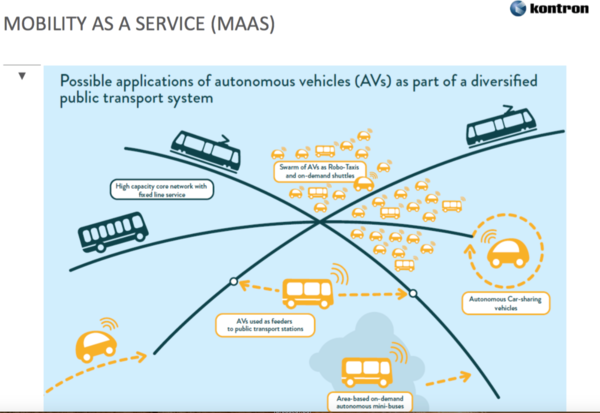 Today, commuters spend many hours in traffic jams on the access roads to their jobs in the cities. This is also confirmed by figures recently published by the German automobile club ADAC in its 2017 traffic jam balance for Germany. According to this study, road users spent around 457,000 hours in traffic jams, which is 9 percent more than in the previous year. The autoclub recorded 723,000 traffic jams in 2017, an increase of around 4 percent compared to 2016. There was also an increase in congestion kilometers: they totalled a total length of 1,448,000 kilometers - an increase of 5 percent. On average, an avalanche of 4000 kilometers of standing or slow-going cars formed in Germany every day. And these are only the figures for Germany!

The situation is no different in all other metropolitan regions around the globe: Be it Paris or Rome, New York, Los Angeles or Lagos, Beijing, Tokyo – stop and go and traffic jams, wherever you look. As half of mankind already lives in cities or in the catchment area of cities today, hardly anything will change in this situation, if we do not take countermeasures. Modern, new transport concepts that take account of individual traffic as well as public transport, cyclists and pedestrians become more and more important.

With intelligent concepts against traffic congestion

“Public transport, in combination with alternatives like e.g. e-bikes, will play a greater role in the future, especially in conurbations," said Michael Kadow, Managing Director of the Hessian Innovation Centre for Sustainable Logistics and Mobility in an interview with the Frankfurter Neue Presse in the run-up to the Mobility Congress in Frankfurt in October 2017. Automated or autonomous driving e.g. will make driving safer, smoother and more comfortable.

“Networking all these services will make the offer more attractive," says the mobility expert. "The traffic network is like the Internet: It is necessary to link the existing transport networks in a meaningful, optimal and safe way, because this is the only way to achieve more than just the addition of the individual parts." The challenge today is to optimize interfaces between networks and create new interfaces. As an example, he cites a model from Graz, Austria, where these interfaces are called TIM sites. TIM stands for "Daily Intelligent Mobile – in German Täglich, Intelligent, Mobil". These are special public transport stops where the customer can use e-car sharing, e-bike sharing, but can also take a taxi or change lines.

In the meantime, IP-based communication systems based on industry standards have established themselves worldwide in the transport sector. One problem, however, is that proprietary or obsolete solutions are not compatible with each other. This impairs the work of the operators. However, there has recently been a trend towards cost-effective systems based on open standards. They enable preconfigured solutions that work with state-of-the-art technology. Transport companies can use this offer to develop forward-looking transport concepts that can be scaled to suit growing demand and allow the development of new transport options.

Basic element can be IoT gateways that enable fog, edge and cloud computing as well as BigData analyses. They form the basis for the timely collection of traffic and transport data. For example, Kontron’s LoRa MQTT Trace gateway, which provides edge computing capabilities in the mobile environment, can be used as a link between a local IoT network and a TCP/IP-based private or public network. MQTT is a standard-publish-subscribe-based lightweight protocol on top of TCP/IP. The Gateway can be installed in the center of a system and comes with an IoT library as well as Edge Analytics. Data can be collected from a local IoT Network e.g. from sensors for passenger counting, door diagnostic or smoke/fire detection. Data collected from private or public Networks allow stream analytics, fleet/asset management or real-time traffic information and many more.

As data can be generated from various sources and can be analyzed to meet the transport operator’s needs, cities can build a flexible infrastructure, that allows “Mobility as a Service” (MaaS).  Integrated software applications enable the transport operators to use autonomous vehicles or eBikes e.g. to build diversified public transport systems to become more flexible and meet individual needs of cities. This is enhanced by more processing power in devices and at the edge. Autonomous car developments which require extensive perception and processing engines have pushed Kontron and the embedded computer industry to bring the Data Center in the car. Combined with V2V and V2I connectivity these smarter vehicles make smarter cities.

Looking into the future

Within the next decade experts expect:

We at Kontron are convinced that future developments will solve the traffic problems of the metropolitan regions and make cities around the globe more livable.

View also our videos on the topic: