Mastering the Challenge of Autonomous Driving with Kontron

Electric and autonomous driving are essential buzzwords for innovation in the automotive world. In Formula Student, students bring them to life - supported by Kontron.

Build a real race car yourself: This dream comes true for students who participate in the international design competition "Formula Student”. Every year since 2011, around 60 students from the TU Hamburg have been building a new electric racing car under the headline "e-gnition Hamburg".

Together, they create the concepts that ultimately make the vehicle light, fast and agile - and that get it driving in the first place. The latest car uses 36 different microcontroller boards developed entirely in-house, which work in tandem to make it run. All the necessary functions have to integrate perfectly into the overall system to create a reliable vehicle. The specialists for chassis and aerodynamics ensure lightweight construction and best driving performance.

This has to stand up to international competition in the summer at prestigious venues such as the Hockenheimring. And also the students have to put their knowledge to the test in front of a jury in the "Engineering Design Event".

Since the 2016/2017 season, humans are no longer the only ones behind the wheel. In the driverless class, the race cars have to find their way through the track completely autonomously. Additional sensor technology such as lidars and cameras help them perceive their surroundings. From the data obtained, a built-in computer creates a map of the surroundings, recognizes the route marked with road cones and plans the best trajectory. Finally, controllers ensure that the vehicle maintains the speed and direction as planned.

In this way, the computer takes over precisely the tasks that previously fell to human drivers. And like humans, it must be fit enough to achieve good driving performance. Part of the task lies with the students, who work intensively on the algorithms and implementations, the other part with the hardware. It has to carry enough power.

The first autonomous vehicle was a previous year's vehicle to which the additional components were retrofitted. The central computing unit, a standard PC mainboard, was attached to the back of the car like a jetpack. Over the next few years, the PC was placed in a drawer in the rear. This was how the competitions were successfully contested. 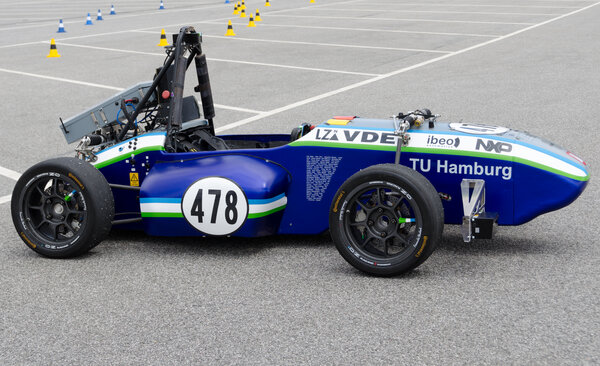 However, the new functionalities entailed greater weight and compromises in aerodynamics, for example, so that the competitions were contested with and without drivers using two cars.

The "egn20", this summer`s model, is now the first combined EV/DV model. This means that for the first time, a dedicated vehicle is not used without a driver, but a car can compete with and without a driver thanks to a modular design. The driver jumps out and after a few moves, the car continues to drive on its own. The goal, however, is complete integration so that man and machine can hand over control to each other seamlessly.

egn22: Integration at the next level

While planning the next model, it was therefore decided to fully integrate the PC into the vehicle. Until now, the hardware-related real-time functionalities were located on the board computer on a microcontroller, and the more sophisticated calculations for the autonomous mode on the PC. The next step is to merge the two units into one physical unit.

But to develop a PC completely on one's own is unrealistic, even for a team in Formula Student. The solution to this problem: COM Express® modules from Kontron. In the concept developed, the carrier board developed in-house provides all the connections and the real-time functionalities, while the attached COM Express® Basic module, together with a small graphics unit, supplies the computing power for autonomous driving. The module concept makes it possible to use exactly the connections required for the peripherals in the vehicle. Thus, the vehicle`s “brain” is integrated in a compact and powerful manner. As a pioneer of COM-Express® modules, Kontron is the perfect partner for us. The COMe-bCL6 module with a Core™ i7-9850HE from Intel® provides the computing power we need and reduces external overhead with the soldered-on flash memory. External sensor technology is connected via USB and Ethernet. A direct Ethernet connection between the COMe module and the microcontroller allows fast and flexible data exchange between the two units, while the COMe module's connection to the CAN bus in the vehicle enables easy communication to all other boards. 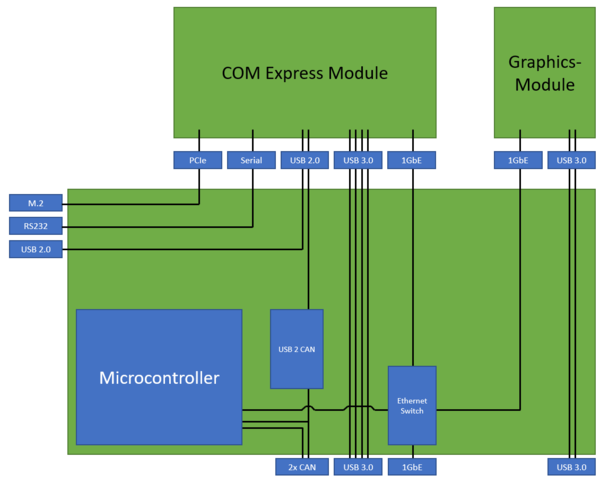 In the beginning there was the idea. But this had to be transformed into an initial concept with a lot of research and discussion, which was then initially reviewed by former team members. With this idea, we approached Kontron and were delighted with their quick offer to support us. In several discussions, we finalized the selection of the appropriate board and were allowed to subject our circuit diagrams to a professional check. In the next few months, our board will be fully developed and produced. We can hardly wait to bring both parts of the new unit together and install them in the latest generation of Hamburg's electric racing car!

Without Kontron's generous support with the board and Kontron's competent advice, this challenging project would hardly be possible. We are grateful to have such a great partner at our side!