The Electric Giraffe goes to Washington – Chapter 2: Good Planning is Half the Battle

Right away, Sherry and Louise agreed to help out all they could with regards to finding a way to fund the appearance, and gave me the go ahead to start putting together a plan for shipping the giraffe to Washington. I was now once again in unknown territory with the giraffe. Not since his birthday in August of 2005 when he made his first public appearance out in the Black Rock desert of Nevada had he been shipped such a distance! And this time it was going to likely be in a shipping container, all alone, with me nowhere near to keep an eye on him. It was a scary thought, but, I like adventures!

As the momentum built, it became clear that there was no way I could handle things because of my day job, which I could not walk away from. I was close to despair when my good friend Alan Murphy of Murphy Surplus in San Diego came to my rescue. He said to not worry, he would front the money for the container and getting the giraffe shipped, plus handle all the logistics. All I had to do was get the giraffe to his yard and he would handle everything.

And that was with NINE DAYS TO GO!!!

At this point the knuckle biting in this adventure really began. Alan had things down to exact days and hours. An ocean going shipping container would be specially modified for the Electric Giraffe and built in Los Angeles. These containers come in 20 or 40 foot sizes only. What we needed was a 10 foot container, which is made by cutting up a larger one. This container would be ready in 3 days, shipped to San Diego in one day, loaded that evening at his shop and shipped out the following day with only 3 to 4 days to make it to Washington. If any one thing fell down at this point, the gig would be lost. Everything had to work perfectly in sequence or it would all fall apart. With Alan at the controls, I wasn’t worried. He’s done this before.

When he told me the container had arrived I was ecstatic, and then suddenly VERY worried. The container’s inside dimension was 9 feet and 6 inches!   At first it didn’t look good, but it turns out that without his neck and tail, the Electric Giraffe is exactly 9 feet long. All we had to do was remove the Giraffe’s head and neck assembly, something he was designed for so he can squeeze though doorways and openings you would not normally expect him to fit inside. The giraffe slid into the box perfectly, a box still reeking of fresh paint because it had only been made the previous day! The shipping company showed up ahead of time, and was out that Thursday afternoon with just 4 days to make it to Washington. And he was headed for non other than the Smithsonian’s storage house to be secured and cared for in their main loading facility just outside the city! At this point, I was so excited I could hardly sleep, but when sleep came, I slept like the dead from all the excited exhaustion I was going through. 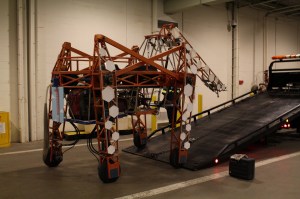 And suddenly, we were flying. We arrived in Washington at 8:45am after an all night “red eye” flight, got our rental car and sped off to the Smithsonian, full of butterflies about the giraffe, what his condition was, etc.   We finally found the warehouse and to our delight, the giraffe had shipped perfectly and all was in order. Everyone at the Smithsonian were not only very helpful, but also very curious and enthusiastic about what this strange creature was that was in their loading dock. They milled about like excited kids as my dad and I extracted the Electric Giraffe from the container and put him back together and started checking his computer and hydraulic systems. As I powered up the giraffe and walked him back and forth in the area, they simply gawked and stared in amazement. They had never seen anything like this before, and were completely thrilled to be taking part in this adventure. Stay tuned for chapter three and read tomorrow how our journey continues.