On Monday morning, May 19th, I got all packed up for the drive home from San Mateo. Maker Faire 2014 was done and over with. My programmer (and namesake for the Giraffe) Russell Pinnington was dropped off at SFO and was on his way home to England, and not likely to be seen for another year. I hit the freeway and had a nice drive home alone, listening to music, electric giraffe in tow, and reflected on a yet another fantastic weekend at what’s become my favorite event of the year. 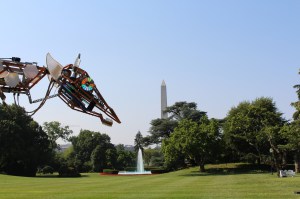 When I got home I checked my email. I just sat and stared in disbelief at first. The White House was holding their own Maker Faire and was inviting me and my Electric Giraffe Project to attend! Right away the distance and timeline were very daunting. The event was exactly 1 month after the Maker Faire in San Mateo! And the Giraffe has never been farther away than Nevada when I took him to the Burning Man Festival in 2005, 2006 and 2007.

And suddenly, here was the White House, of all places, sponsoring a Maker Faire of their very own. Obama has always been a fan of the self employed entrepreneur, the inventors, the Makers. The President has also been featured in quotes on Maker Faire T-shirts for past events. I never would have imagined that in becoming the “mascot” of the Maker Faire, that my Giraffe and I would be invited to the White House lawn! To the home of the Leader of the Free World. I was filled with pride at having been invited, but, could we pull this off in time?

Stay tuned for chapter two and read tomorrow how the adventure continues.