Two form factors are currently fighting for domination in the market for small computer on modules. Qseven, released 2008 and created for X86 platform, namely for Intel’s Silverthorne Atom chips, which were the first implementation with Qseven. And then there is SMARC, created in 2012 for the usage of ARM processors. Different implementations with chips from Freescale, TI and Nvidia have been seen. It is quite interesting that both form factors are used by the other processor world, too. What are the benefits of each form factor and why is SMARC better?

Computer on modules need to be small: as small as possible to make small systems. They need to be thin and lightweight, but should have enough space to allow all necessary features, like processor, DRAM, flash, etc. to be placed on the module.

The number of available pins is also very important. The more pins you have, the more interfaces can be connected. The following table compares SMARC and Qseven regarding the number of pins and the module area.

Comparison of SMARC and Qseven regarding the number of pins

It shows, that the µQseven is the form factor with the smallest area/pin density, nevertheless there are doubts, that the very small area of 70x40mm are enough to fit quite a lot of designs on it. Currently the market offers only implementations with Freescale’s i.MX6 processor in this very small form factor. Qseven has the lowest area/pin density, but SMARC has more total pins.

SMARC vs. Qseven: The Used Connector

Qseven’s connector is the MXM2 connector, a connector that was used for graphic cards in high end laptops. Nowadays this is normally done by the MXM3 connector which is used by SMARC. How is the availability of the MXM2 connector secured, when it is not used in its original purpose? This question should be answered by the Qseven manufacturers.

Regarding connector availability there is higher security in the newer MXM3 connector which is used for SMARC:

SMARC vs. Qseven: The Interfaces

Both form factors offer the interfaces needed by a typical embedded platform in more or better ways, but let’s compare: 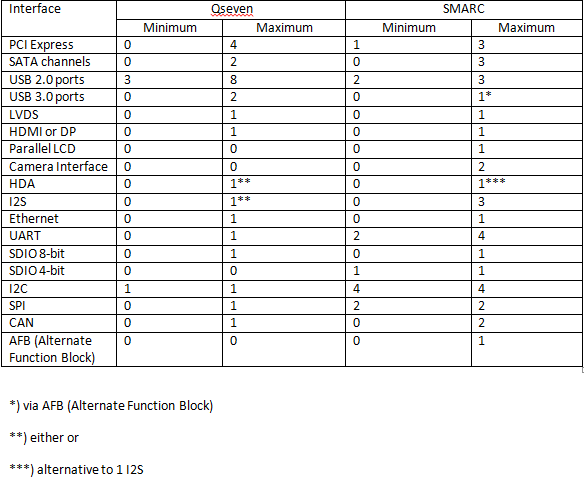 Comparison of SMARC and Qseven interfaces

It is obvious to see, that the minimum requirements on SMARC are higher as on Qseven. Theoretically a Qseven module could exist which offers only USB and I2C. Of course there is not much benefit of such a low level configuration for a module. A higher minimum requirement on interfaces of a module standard means, that the intercompatibility between different modules on the same carrier board is higher. So the design risk is reduced, when e.g. a module becomes end of life and can be replaced easier by one of the possible successors.

Compared to Qseven, SMARC also offers an additional so-called “Alternate Function Block”. These 20 specially defined pins allow flexibility between modules. They can be used e.g. as MIPI DSI interface, USB 3.0, MOST, a 2nd Gigabit Ethernet or an industrial Fieldbus interface. The interchangeability is ensured by defined electrical characteristics (some are differential, some are single ended) of these pins.

Another win for SMARC is an interface, which Qseven completely lacks: Camera!

More and more applications need the possibility to use live pictures to connect to the surrounding world: Logistic systems where goods need to be scanned, face and gesture detection or self-controlled vessels. In systems with Qseven these camera implementations cannot be connected over the module connector, but need, if possible at all, an additional flat foil connection to the module.

SMARC has 2 camera interfaces defined on the connector and therefore cameras can be integrated easily on the carrier board. So again regarding interfaces, SMARC is the winner:

What about you – do you agree with my analysis? Do you have experience with SMARC or Qseven or even with both? What do you think which future development will both formfactors take?