The embedded world trade fair took place for the 15th time from February 27th to March 1st, 2018 in Nuremberg. Present as always: Kontron, an S&T group company. Our trade fair presentation has always been a reflection of the industry’s trends and issues. True, there were Embedded Systems at the field level, or centralized data storage in computer center at the first installment of the embedded world 15 years ago. But today’s technological possibilities of web-based networking or Cloud Computing were still a long way off. Luckily, the world of Cloud Computing didn’t stop turning in 2003: development has been driven by exponentially growing degrees of networking based on Ethernet technology and web standards, almost unlimited Public Cloud storage, all but ubiquitous internet connectivity, the exponential growth of Embedded Computers’ processing power based on Moore’s Law, and the constantly dropping prices of storage. 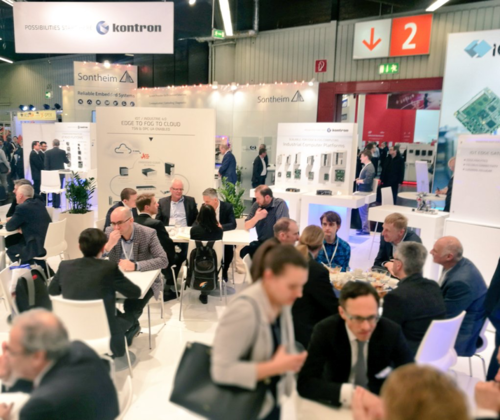 More than 1,000 exhibitors and 32,000 industry visitors again found their way to Nuremberg. There was a full house at the Kontron booth.

Kontron’s key issue: The fusion of IT and OT

The main topic of the Kontron trade fair presentation this year was IoT “from Edge to Fog to Cloud” – which includes the fusion of IT and OT in industrial settings. From a medium- and long-term perspective, technologies such as Time Sensitive Networking (TSN) and OPC UA offer the potential of replacing proprietary networks at the field level. This makes the connection of IT and OT with a single converged Ethernet handling IT data transfer parallelly to deterministic control communication a reality in enterprises. Apart from offering the hardware components required as well as long years of know-how, Kontron this year also offered the figurative “glue” connecting the various software components. 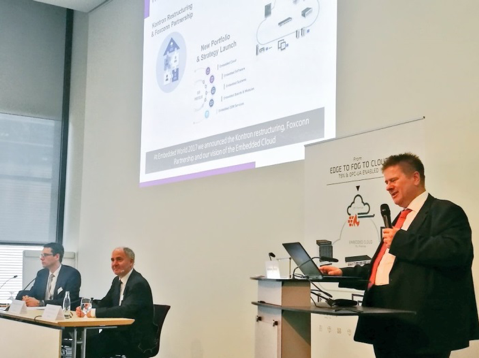 On the first day of the trade fair, Kontron presented its highlights at a press conference, with CEO Hannes Niederhauser (on the right) offering an outlook on company strategy.

About a year ago, Kontron S&T announced its shift from being a pure hardware manufacturer towards a provider of pre-configured soft- and hardware solutions for its customers together with S&T Group – in short, a One Stop Shop. By expanding the S&T Group software development center in Linz, Austria, as well as a new Kontron S&T site in Augsburg, Germany, this plan has now been implemented. 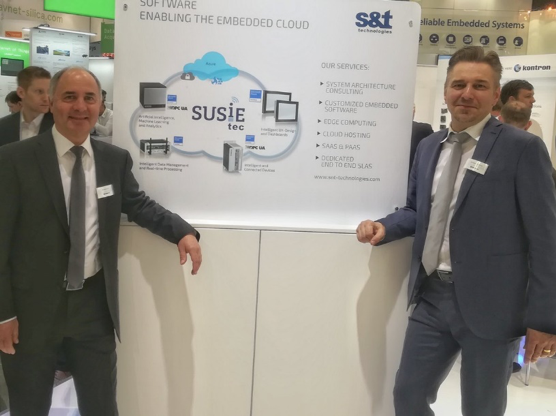 In the S&T Technologies – an Kontron affiliate specializing in consulting and customized software development – the IoT solutions know-how gets centralized. Additionally, the introduction of SUSiEtec, an universal IoT platform connecting components such as sensors/actuators, Edge computers, Fog servers, artificial intelligence, or machine learning, to on-premise Embedded Cloud or the Public Cloud, offers a flexible end-to-end solution to fill the consulting approach with life. To this end, most new Kontron products are now Microsoft Azure-certified to enable the use of Azure IoT Services. SUSiEtec can also be customized to individual requirements, and used as a platform for other cloud services or hardware components. 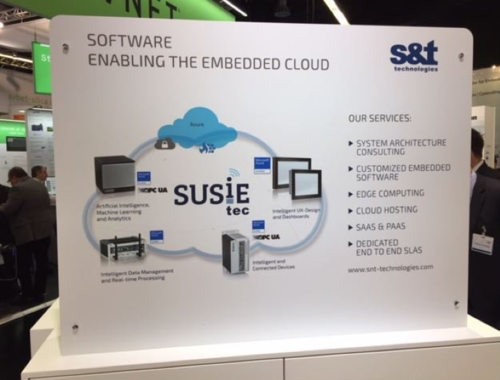 The SUSiEtec is an optimal foundation for IoT/Industry 4.0 projects for individual IT/OT requirements.

Another product-centric trade fair highlight is our TSN starter kit: using an industrial PC with integrated TSN networking card, companies can now get started on TSN. On display was also a live demo with a TSN configuration controling three independent motors running in time synchronization. 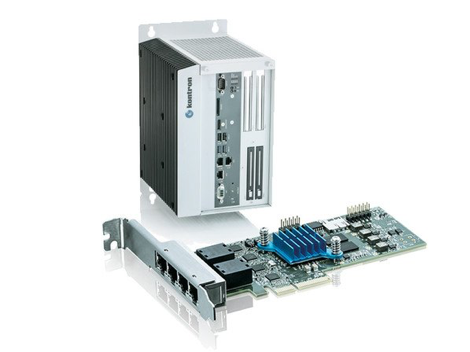 Kontron introduced at embedded world the Desktop Server ZINC CUBE C232, an ideal base for Edge and Fog Computing in the Embedded Cloud. Its compact, cost-optimized design, high server class processing power and extended storage functionality makes it the ideal base for applications processing and analyzing large volumes of data, such as machine learning and artificial intelligence. By installing a Kontron TSN networking card, the Embedded Server can be used for Time Sensitive Networking or as a OPC UA sever.

In addition to Computer-on-Modules (COMs), Kontron also presented its innovative portfolio of SBCs and Motherboards, such as COM Express® Type 7 and Mini-ITX with the latest server-class Intel® XEON® processors. Modules and SBCs are also being used in the IPCs. The new, fanless KBox A-250, based on a pITX-2,5“ SBC with Intel Atom® E39xx processors was developed as a cost-optimized gateway for IoT Edge applications. We also presented a new line of industrial PCs of the family with scalable processing power, a wide range of interfaces, and an optional 2.5“ SSD/HDD. The different Box PCs were presented in live demonstrations for Edge analytics applications using Microsoft Azure IOT Edge and integrating sensors and I/O over LoRa WAN, a field bus terminal over Ethernet IP and a proximity sensor on a mobile robot model.

Expanding the portfolio of Computer-on-Modules beyond the COM Express® and SMARC 2.0™ form factors, Kontron now supports the Qseven standard. Depending on the requirements, the Qseven-Q7AL module is available with Intel Atom®, Pentium® or Celeron® processors, while the Qseven-Q7AMX7 module uses the Cortex® A7 processor. Kontron supports the Qseven form factor to address the installed user base of Qseven to provide a migration path towards modern CPU technology using Kontron products, and at the same time enable them to use the enhanced security and license management functions for new business models like pay-per-use through Kontron APPROTECT, based on integrated Wibu-Systems technology. Further Qseven products are scheduled for release in 2018. 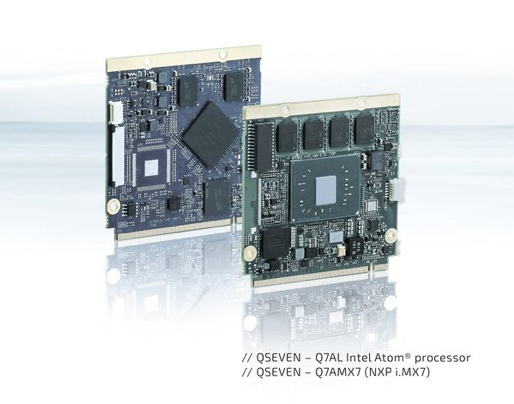 A finger on the pulse of the times: Modules and boards based on the new AMD Ryzen™ Embedded V1000 processors

Kontron and NXP announced their cooperation in the development of Industry 4.0 solutions at embedded world. To this end, they will couple NXP’s i.MX and Layerscape families of Arm®-based processors with Kontron/S&T’s expertise in hardware and software. The products will leverage Microsoft Azure IoT services and Time Sensitive Networking (TSN) technologies to meet the demands of next-generation Industrial IoT implementations for Cloud, Edge computing and factory floor innovations. New Industry 4.0 solutions include Kontron’s i.MX 8-based SMARC 2.0 and Q7 computer-on-modules.

Another sign of Kontron going all-in for IoT is the support for the first hardware-focused IoT software standard UIC, as announced at the trade fair. Kontron, being a member of the SGET (Standardization Group for Embedded Technologies), supports the standard, which is noticable for its open, platform-agnostic approach to server connectivity (Cloud/Fog/M2M), the connected infrastructure, as well as the underlying hardware. Kontron SMARC 2.0 demo board at the booth, where a connection of hardware and Cloud based on the new UIC standard was shown.

HMIs and Panel PCs with the latest Intel® Core™ processors

Even IoT / Industry 4.0 can’t function quite without human intervention, which is why Kontron offers robust Panel PCs and industrial monitors for use with industrial PCs and machines in manufacturing- and other industrial environments. The new FlatClient family Panel PCs are equipped with the latest seventh-generation Intel® Core™ processors. 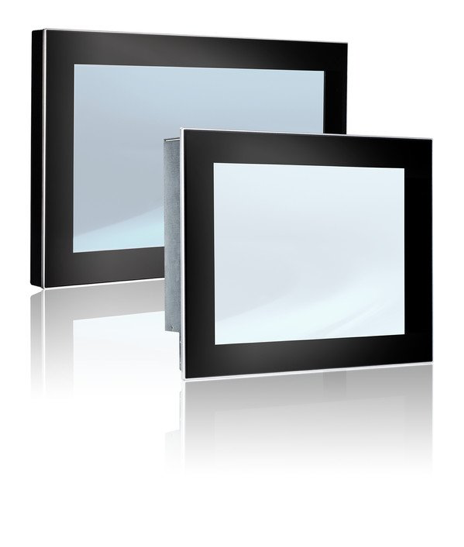 Users of the robust Panel PCs, which are designed for industrial use, benefit from improved graphics and computing performance through the update to the latest Intel processor technology.

All told, the embedded world 2018 counted 32,217 visitors from 78 countries; another increase; just as the number of exhibitors rose slightly. To demonstrate the prowess of its components for image processing and the seamless integration of on-premise and Cloud, Kontron installed a visitor counter at the booth. A smart camera in conjunction with artificial intelligence software and the SUSiEtec platform running on an Embedded Server ZINC CUBE C232 counted all the people passing through the lens’ field of view; the system simultaneously identified all Kontron employees pre-registered to avoid counting these. The result was available through an internet widget made available for all standard browsers from the Cloud. The numbers were determined via Edge analytics, which in this case means on premise at the booth, to allow for quicker matching with the registered base. The system determined that 11,000 visitors in total came by the booth by afternoon of the last trade fair day, including repeat visits. On balance, the trade fair turned out quite gratifying, and Kontron will be there again in 2019, when from February 26th through 28th the motto will be: open the gates of the embedded world! 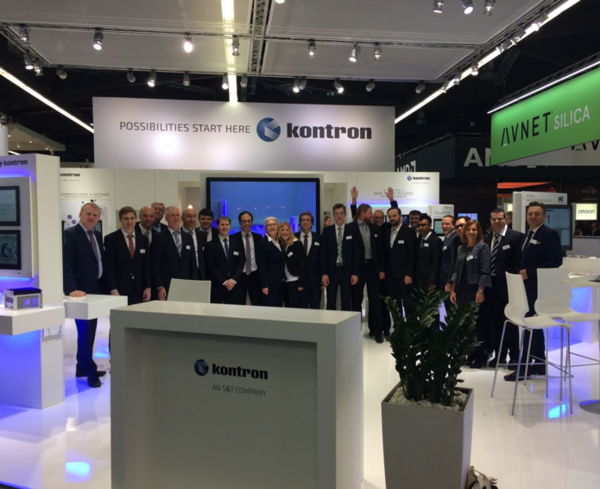 Thank you for visiting our booth. The Kontron team is looking forward to seeing you again next year!