Farming is a tough way of life in any country but when an entire population relies heavily on one single crop for survival, the stakes are especially high. Rice farming in Malaysia is no exception where there is precious little margin between actual demand and available supply. To raise the stakes further it requires around 70 percent of the nation’s available water resources to meet rice production needs.

It is therefore very pleasing to share with you the success that the Malaysian Ministry of Agriculture (MOA) has found in a Precision Farming initiative which will ultimately help rice farmers throughout the country potentially double their crop yields.

It was against this seemingly impossible requirement that Kontron’s Industrial Computer Platform KBox-A201 gateway was deployed by Abbaco Controls, a local Malaysian IoT solutions specialist working on behalf of the MOA.  As a Proof of Concept, they designed and implemented an IoT water irrigation system at one of Malaysia’s largest rice growing areas about 70kms from Kuala Lumpur – the project was run for a year during 2014/15. 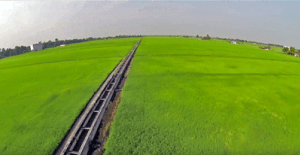 Clearly, for this project to work it was a necessity that the water management could boost crop yield while enabling the rice farmers to use water more efficiently than before. This would then allow any spare capacity from a reduction in usage to be made available for vital services elsewhere.

Compared to the SCADA system, users could securely monitor and control water supply from anywhere and at any time of day or night

Previously, authorised farming personnel were required to drive considerable distances between water sluice gates. This was time consuming, costly and dependent on manpower being available at the right time. With the IoT approach farmers could take immediate action using their smartphones for remotely opening or closing water gates at the optimum times. The solution also triggered early warning alerts to enable preventive action should water levels become too high or low.

Through the depth of real-time data available from the multiple sensors attached to the water sluice gates, MOA personnel and farmers could also do trend analysis comparisons based on historical rainfall, water and temperature levels to more accurately determine the minimum level of irrigation required for producing maximum rice crop yields.

Kontron PC Gateway’s ability to connect a multitude of devices with the addition of I/O modules from other vendors, and support of ModBus and industry standard MQTT messaging, have ensured an optimal TCO for the overall solution.

It’s always inspiring to hear about real-life projects where new technology touches people’s lives. In this case we are talking about transforming an entire nation’s wellbeing thanks to the production of more rice while using less water.

You can get some more visuell impressions on the project here: