Find Yourself a Competitive Advantage with Autonomous Agents and Things!

The amount of daily data coming from new sensors of the Internet of Things (IoT), social networks and real-time data increases exponentially. According to several predictions we will produce 40 zettabyte (one zettabyte equals one billion terabytes) in 2020 – every day! For sure, no one can keep an overview here. So we really have to recognize that without artificial intelligence, we have no chance to use the generated data for our purposes.

An example of how artificial intelligence is already making decisions about what information we get to see, are social networks like Facebook. Facebook organizes the information on every individual news stream and by that preventing the user from being overwhelmed by the mass of data. You can say that these users have already a competitive advantage, because they are quicker than others in organizing relevant information.

Autonomous Agents and Things: one of the top 10 technology trends for 2016

According to Gartner “Autonomous Agents and Things” will be one of the top 10 technology trends that will be strategic for most organizations in 2016. While advances in physical smart machines such as robots get a great deal of attention, the software-based smart machines have a more near-term and broader impact. VPAs are becoming smarter and are precursors to autonomous agents. The emerging notion of assistance feeds into the ambient user experience in which an autonomous agent becomes the main user interface. Instead of interacting with menus, forms and buttons on a Smartphone, the user speaks to an app, which is really an intelligent agent. According to David Cearley, vice president and Gartner Fellow we will evolve to a postapp world with intelligent agents delivering dynamic and contextual actions and interfaces. IT leaders should explore how they can use autonomous things and agents to augment human activity and free people for work that only people can do. They should necessarily recognize that smart agents and things are a long-term phenomenon that will continually evolve and expand their uses for the next 20 years. 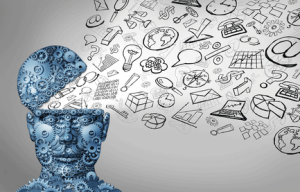 Over a long period, developers had no other choice than to program rules as basis for every machine decision. Today they work with so-called self-learning systems. These computers improve automatically on the basis of experiences. In fact, machine learning has made a dramatic progress in the past two decades. The catalysts behind this are the massive online data availability and the declining costs for powerful computers that can automatically evaluate them.

The most important evolutionary step for every Artificial Intelligence: recognizing the true intention of a human user

Instead of screen and keyboard, human and machine communicate more and more over language. Google Now, Apple Siri and Microsoft’s Cortana are all part of a new generation of digital assistants. They are all already on the market for several years, but in recent months they have become significantly better. And thanks to cloud servers, the computing power of devices is potentially unlimited. So now it is first of all important to win the user’s confidence in the artificial intelligence. The greater the trust of users in smart machines, the more likely they are willing to entrust them with more information in everyday life.

Nowadays, digital assistants already master complex tasks. For this they must be able to analyze the context of information and decide themselves if an information is relevant or not. For us, this may seem like a simple combination of information but in fact this is a huge triumph for the programmers of artificial intelligence. For Smartphone users it may dramatically change the classical search process by providing the user with live and unasked information every time it could be relevant.

Although researchers achieve remarkably good results with purely data-based self-learning systems, they are also experiencing their limit. What people accumulate over many years as a so called “world knowledge”- an intuitive sense for relations that appear to us as a matter of course – is something that machines have to learn in an elaborate process. Something that seems to us humans as natural and obvious and that is at the same time so illogical, so ambiguous and partly so unpredictable is very hard for machines to calculate. Currently many users are annoyed because Google Now’s speech recognition suffers from a lack of short-term memory. For example questions about the restaurant one visited last week, where the Artificial Intelligence must realize from the context of the conversation what the user means are still extremely difficult for VPAs. Many discussions with computers end after a few sentences because computers can have difficulties to recognize back references or contextual, sublingual information like humor and irony. Recognizing the true intention of a human user is the most important evolutionary step for every Artificial Intelligence. But honestly this is something that even humans have difficulties with. So it will be interesting to see if and when the artificial intelligence will be a better judge of human nature than we are ourselves.

So it seems, as both differs from reality: the fear of super intelligent devices and also too great hopes on the intelligence of machines. And like with any powerful technology we have to examine the question of whether and how we want to use Artificial Intelligence in our society. For me, it can only be collaboration between man and machines. Artificial Intelligence should complement human abilities instead of replacing them.

What is your opinion?