Mega metropolises all around the globe have to master various future challenges, including mobility, climate protection, healthy residential sphere and social cooperation. The UN estimates that in 2030 about 60 percent of the world population will live in towns and till 2050 it should be even 70 percent. To master this huge growth, town planners invest in digital urban development concept – also known as “Smart Cities”. India, for example, has announced the construction of hundred Smart Cities and China plans to invest 8 billion US dollars in the development of their own Smart Cities. The market research company IHS estimates that there will be 88 Smart Cities worldwide till 2025.

We have to professionally handle “Big Data”

The concept of the Smart City stands for an intelligently linked urban infrastructure. The heart of the concept is the Internet of the Things (IoT) which is enabled through cloud computing, modern security concepts, mobile connectivity and M2M technologies. Wireless networks will play a central role in the Smart Cities, together with fiberglass cables, which are the backbone of these networks and thereby of the whole Smart City infrastructure. In the context of networked Smart Cities, the amount of produced data and its handling will play a very important role. In fact, the amount of data produced is constantly growing. The reasons for this are the digitization of content, the data exchange and above all the integration of digital instrumentation and control systems in everyday objects and the communication of these data with “intelligent environments”. “Big Data” – which includes an intelligent use of such large amounts of data – is a challenge that had be overcome if we all want to benefit from intelligent technologies.

With the international agreement on climate change, for the first time almost all countries commit to climate protection. The contract sets out the goal of limiting global warming caused by greenhouse gases to well below 2 degrees. Worldwide Smart Cities can make an essential contribution towards reaching the goals. One of the most radical designs for a city of the future provides the visionary Belgian architect Vincent Callebaut with its utopia “2050 Paris Smart City“. In this city ecology and sustainability is very important – for example by reducing greenhouse gases. To achieve this, Callebaut has designed, among other things, so-called “photosynthesis towers”. These are actually parks which are running in the vertical direction. In the facades of the towers there are algae included that are to transform the climate-killer CO2 into biomass. 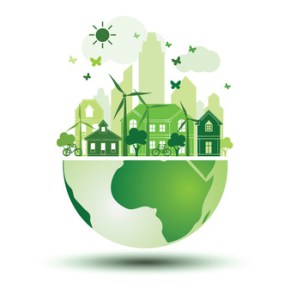 In Germany there are already many smart applications installed to reduce energy consumption and emissions – and many more are in the pipeline. Omnipresent are intelligent traffic leading systems. But in the near future even more smart ideas will actually be carried out in reality. Thus the energy providers want to introduce, for example, intelligent stream counters all over the country. With it not only the meter reading of the energy consumption can be automated, but one could save energy by consumer-specific actions or optimally intercept top loads in the energy network. Another example of a Smart City is a road lighting which only switches on when it is really used. These examples can be extended arbitrarily, because in principle almost all areas of life in a town can be integrated into the model of the Smart City. In the so-called Dewog or Stegerwald settlement in Cologne, the vision of a Smart City has already become a reality: networked mobility, less parking search traffic, e-bikes and electric cars for hire, a virtual power plant, power control via the Internet, the highest standards of thermal insulation, photovoltaic on the roof and modern communication technologies are the building blocks of the concept. The settlement should be a model for other districts. Together with Stockholm and Barcelona Cologne has won a public EU-tendering. The cities share 25 million Euro to show within the next five years by way of example, what can be done better.

Nearly every smart application is possible but also desirable?

The smaller, the more sophisticated the computers become, the faster our visions will become reality. Because as soon as the IoT has spun its network so far that everything communicates with everything, nearly every smart application is possible. But the sustained success of a Smart City depends on how the generated data is used by all stakeholders, citizens and companies. Networks and applications must be able to manage and integrate the enormous amounts of data which is produced by all devices from Smartphones to street lighting. In the euphoria about the technological developments and opportunities we must not forget that the current social and technological developments raise many questions that need to be addressed and thought along. A blind faith in progress does not help. These future issues must be negotiated and endorsed by the community of citizens, otherwise the change will fail. And this is something that should definitely be avoided especially in view of the great potential for emission reduction and energy savings.

Find out how Kontron’s IoT solutions also help to enable a world of possibilities in the new IoT brochure: “SHAPING OUR WORLD’S FUTURE” which you can download here.

How does the Smart City of your dreams look like? Can you already tell us about positive experiences with energy saving through the IoT?