The Electric Giraffe and Kontron: How did THAT happen?!

Long before Kontron’s location in San Diego, a fire alarm contractor named Frank (Lindsay being his middle name) Lawlor found himself wandering the massive new and very empty tilt-up structure way out in what was known then as “the middle of no-where’s ville”.  Or more fondly as “Scripps Poway Raceway” to those of us who owned fast motorcycles.

That contractor was myself, Frank Lawlor, aka Lindsay.

As memory serves this was sometime around 2001-2002.  I helped build out the fire alarm system that was to become “Qtron”, a company who manufactured high power RFbased PC boards for the then booming cell tower industry.  You might have recalled in the lobby where the illuminated pictures are now, were once solder paste masks for making those boards. 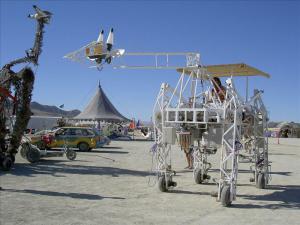 Fast forward a few years and suddenly the building was up for sale, and everything inside it.  This is why there is a massive suspended power grid above the entire manufacturing floor.  I can’t imagine what that cost!  This was also about the time that I was building the Robot Giraffe, a sort of “project that got WAY out of hand” when I decided to build an “Art Car” to take to the Burning Man festival out in the deserts of Nevada. The biggest surprise being just how much attention he got.  It was _staggering_ to say the least!

About this time I met Jayson Ebnet, who works for Kontron and is a very cool guy.  We got to talking at lunch one day and I told him some of the goofy things I do after work, which for me was working and welding on my Robot Giraffe.  This got back to Richard Pugnier, VP Global Marketing at Kontron,  and suddenly Kontron was interested in perhaps supporting the giraffe and taking him to the Embedded Systems Conference in San Jose.

It should be noted here that the Giraffe was already enjoying a huge amount of attention at the newly formed “Maker Faire” in San Mateo, and was well on his way to becoming the star of that show.

I was very excited but also apprehensive.  The Giraffe at the time was still a very raw machine, rusty from his trips to the dead salt lakes of the desert.  But nevertheless, we managed to have a good time at the conference, and we were given two exhibit spots, one outside in front of the convention center and one inside.  We even managed to be featured on San Jose’s local news channel, proudly displaying the Kontron name. 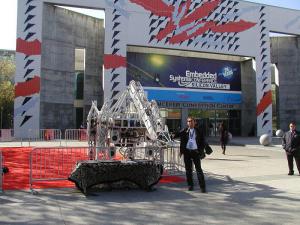 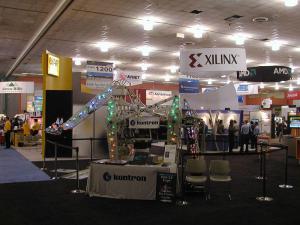 Being inside the convention hall was a different experience entirely and was pretty intimidating.  Here were all these huge names, INTEL, Motorola, etc!  And my rust laden giraffe trying to fit in.  I took a long hard look right then at what I wanted to do with the giraffe.  We were already getting attention from Microchip and a few other names.  Would his adventures in the desert hold him back from being something professional and shiny that would gather even more attention and sponsorship?  What did I want to DO with this one ton iron thing I had created?

It was then and there, between the Maker Faire and the Embedded Systems Conference that I knew I wanted something more for the giraffe than his trips to the desert which would surely result in his slow decay from all the salt laden dust.  I wanted a professional machine, one that people would admire and want to see more of.  Also, the project would become one of continuous research and development, one that would try to show up each year with new developments and enhancements.

We were going to bring a ton of steel to life!

Do you want to know how the Electric Giraffe made its way to the White House this year? Stay tuned! More to come in one of the next blog posts!