The Electric Giraffe goes to Washington – Chapter 5: Russell meets the Leader of the free World

From there we got things unloaded and set up the Electric Giraffe near the rose garden, and waited. The heat was unbearable and most of the event was moved indoors. Russell and I did an interview with the White House press crew, then they strapped a camera onto his neck for extra footage during the live feed. After what seemed like ages, the president finally arrived. As I watched him make his way up the lawn towards me, I just kept telling myself, “Don’t pass out…don’t pass out…”

And there he was, coming towards me and my creation, the President of the USA. The leader of the free world. “I like those ears!” he commented first, and I greeted him and shook his hand. What then followed was a blur. It was all so fast, but it seemed to last forever at the same time. I did my best to describe the giraffe in terms that were short and concise and to the point. I got him to pet the Electric Giraffe eventually, and he commented on Russell’s accent. “He has a bit of an accent!” he noted, and we had a good chuckle about that. I described several features of the machine and he said, “Now, I hear you ride can this?” and I said yes, and he smirked and said the Secret Service would not be having any of that!   And next thing I knew it was time for him to leave. He motioned me over for photo’s, and I took up position near him, and he said, “No no, come here” and put his arm around me. (Get here some more impressions of our incredible meeting!)

And I was arm in arm with the leader of the free world. I can’t thank everyone enough at Maker Faire for making this happen. It was a dream come true that I never knew I had until it happened. People ask me where we will end up next. I just smile and say, “I don’t know…I’m just holding onto his tail and he’s the one dragging me along!” 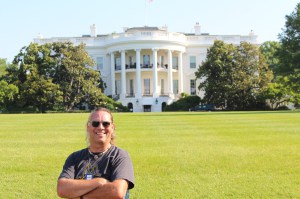