The Electric Giraffe goes to Washington – Chapter 4: Screaming on the Road

On Wednesday the 18th, with a Maker Faire photographer in tow, we hit the road and went to the Smithsonian to get the giraffe on the tow truck rig. Right away we noticed a possible serious problem. The Electric Giraffe up on the towing rig was VERY high up in the air! So high that we thought there was a risk of him being stuck inside the loading dock and would have to come off again! But we rolled forward cautiously and he cleared the door by a few inches. Once outside the driver became concerned. He spent a few minutes going over the route in his mind. There would be many overpasses, and a few long tunnels to go through. We got out a tape measure and estimated our height to be around 13 feet plus a few inches. We guessed this was about the maximum height of most diesel rigs.

Another serious problem was time. Not only were we starting to run late, but we noticed very heavy traffic going back into town. After talking things over and going over the height of the rig plus the Electric Giraffe, we agreed that we were very close to the standard height and that it was worth the risk. Plus we HAD to get going!

And so we hit the road, myself being VERY nervous about how the giraffe would do on the road, as top heavy as he was, with a driver who might be unfamiliar with such a load. I urged him to take it easy in the corners, and was gripping the steering wheel of our car like mad when the bridges came! And it was CLOSE. We practically screamed several times as the giraffe just barely cleared the bridges with inches to spare, but the tunnels were the worst. Not only did it look like he was going to hit, but the tunnels were full of boxed lights that he looked like was going to crash into at any second! This was by far the worst fright I’ve had with the giraffe ever. If he struck anything it not only would damage him for the show, but could rip him off the rig entirely! And suddenly we were in downtown! No more bridges!

But we were not there yet. We still had multiple layers of security to go through, and we wondered just what the secret service would say and do about a huge Electric Giraffe heading for the White House!

We finally found their inspection yard and pulled in, guys walking all around us, checking out the rig and wondering just what in the world this strange entourage was! The yard master approached me and asked for my paperwork. “I….have non sir” I shakily replied. “ah…well, come with me” and we all went into the office and got our ID’s copied, answered a few questions, etc.   I thought we would be stuck in there forever, but suddenly we were asked to go outside again, and stand by our vehicles. The secret service guys were by now all over the giraffe, checking our equipment, but, it all seemed to be going unnaturally fast!

Then this awesome looking SUV sped into the yard and out hopped a full on secret service agent, complete with guns, body armor and god knows what else strapped to his chest and belt. He went over to the yard officer and the two exchanged words for a minute. Then they came over and told me he would escort me to the white house immediately. But before we left he strode over to the giraffe. “What’s this thing?” he said peering up at it. I explained that it’s a giant robot giraffe, sort of like a dune buggy with long legs, and it can talk to you.

“That’s awesome…lets go.” Was his reply, and as he walked to his car, he turned and said, “If the lights change red…run ‘em!” and off we went! We were at the White House gates in no time, and more short inspections ensued. I gave my car to the Maker Faire photographer since he could go no further with us, and off we went! After more meetings with more people, we found ourselves walking up the main driveway to the White House! It was almost surreal. Here we were, a couple of guys who hacked together a pretty cool project, but…the White House? Really? And yes…here were the heavy gates being pulled open. We were going in. Stay tuned and read tomorrow how we meet the leader of the free world. 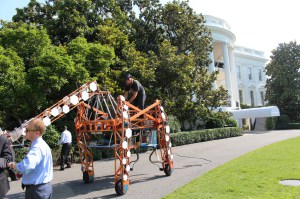