When I was still young, science fiction books and films were my favorite way to spend time. So I more or less grew up by reading books from authors like Robert A. Heinlein or watching films with Captain Kirk, Bones and Spock. One of the coolest things there were the replicators: Small devices like a microwave oven. You told them what you want to eat or drink and the food was produced virtually out of “thin air”. In the real life, replicators were just a wishful thinking – this fact was quite clear to me. But I was so used to read that a hydroponics system can offer oxygen and food to the entire crew of a spaceship, that I thought this must be a quite well-established technology. I was really disappointed when I found out later, that it wasn’t…until now.

IoT Trials in Smart Agriculture and Horticulture: It can Work!

Being involved in some of the IoT trials in smart agriculture and horticulture, I have started to see working solutions like this on the horizon. Using optimization for climatic conditions, watering and fertilization, it seems very possible to significantly increase the yield und reduce the needed amount of energy required for high yields. And this all looks quite simple at first glance: Give each plant the light, heat, water and fertilizer it needs. 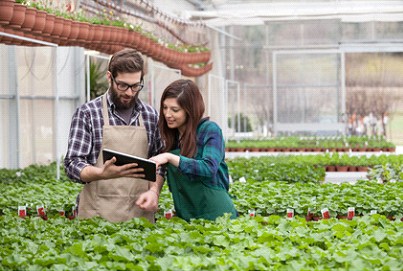 When we dug deeper into this it turned out to be quite challenging. Normally you would give the same amount of water to a big area and even there you cannot guarantee equal distribution. So you have to measure and control on a local basis and we found out quite fast that this is not really possible on a “one plant” level. To understand the magnitude of the challenge you need to know that we are talking about glasshouses having several kilometers of beds for e. g. tomatoes. Using wired sensors was not feasible due to the great distances which we had to bridge. The logical step was going for wireless sensors. But using a communication based on “sensor to gateway” like Bluetooth or Wi-Fi don’t bridge the distances of more than a kilometer. Together we decided to go for commercially available sensors which support a mesh network. After several tests we implemented ZigBee (ZigBee is an open, global wireless standard to provide the foundation for the Internet of Things by enabling simple and smart objects to work together).

Remember we are talking on several ten thousands of plants so having a dedicated sensor for each plant is simply too expensive. The solution therefore focused on segmentation of the beds. Having the data on humidity, pH value and temperature for each segment a separate control for watering and fertilizer was implemented. One of the big challenges was to deliver different amounts of fertilizer and water to each of these segments. This is technically quite easy but you have to keep the cost for pipes and valves on an acceptable level. Our customer found a good solution for this. At the same time he controlled the temperature by blinds and opening/closing windows. In the end the test reviled an increase of the yield by around 10% while reducing the needed energy.

In Germany we tend to imagine this is only a possibility to burn much energy and produce cheap watery cucumbers or tomatoes without any taste. I do not consider this way of thinking. From my point of view, the implementation of better and more efficient IoT-solutions in horticulture and hydroponics will lead to a good-quality, tasting food for the world’s increasing population.

What about you? Do you think we will use the opportunities of the IoT in future to feed the growing world population with good and affordable products?