Industry 4.0 and Internet of Things are emerging market segments around the globe 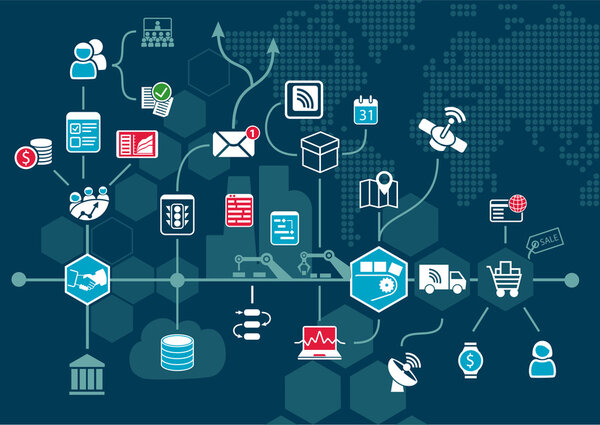 Applications that enable the Internet of Things (IoT) and Industry 4.0 are often compared to the workflow in an ant colony. The digital exchange of data with suppliers and customers as well as from machines to machines (M2M) runs via sensors and cyber-physical systems that communicate with one another like ants do. This guarantees trouble-free communications.

The principle already works and will be adapted by more and more companies within the next years, confirms a study that analysts of PwC and Strategy published in 2016. Due to this paper the German Industry for example is going to invest about 40 Billion Euro per year into Industry 4.0-solutions. Companies expect to gain more efficiency and to reduce their costs with an investment in Industry 4.0 and IoT-solution. They also think, they will benefit from more flexibility and get the chance to meet individual customer needs better and faster. This will help them to survive in competitive markets.

Production companies, that have been interviewed for the PwC-study said, they plan to invest around 3,3 percent of their yearly revenue into industry 4.0 solutions within the next five years. This stands for nearly half of the total investments into modern equipment. More than 80 percent of the industrial companies have plans to digitalize their value creation chains until 2020. They want modern production processes and more productivity to establish their position in competitive markets.

The USA and Germany are presently leading, when it comes to industry 4.0 competences. This is the result of a market research, that was done for Bitkom, the leading German digital association. About 560 representatives of German industrial companies with more than 100 employees have been interviewed for this study in spring 2016. The participants were asked for their opinion about the nations, that are leading in transforming their traditional factories into modern networked production areas. 28 percent think, that US-companies are leaders of this transformations while 25 percent see Germany at the second and 20 percent Japan at the third position. France (8 percent), China (6 percent) and Korea and the Netherlands (3 percent each) complete the list. With the USA and Germany in the front row, Bitkom sees the leading economical nations at the top of the list of markets, that will influence the transformation from the classical factory to a connected production environment and open markets for the Internet of Things.

Influencers are part of the game

Research and development, as well as State-of-the-art-production are key to success in the IoT-segment. Not to be forgotten are marketing, Influencer relationships and brand awareness. In the digital world they are extremely important and the cornerstones of a successful IoT- and Industry 4.0-strategy. Companies, that plan to invest into IoT and want to transform der classical processes to digital ones, need influencer programs and brand awareness to make their transformation a success. Onalytica was founded in 2009 and is a company, that is specialized in providing Influencer Relationship Management software. This tool can help companies, to build and manage a network of various influencers to meet the needs of individual markets and industries. The company works with Marketing, Communication, Digital & PR professionals to help configure influencer programs. Lately the company published a paper, that addresses the IoT-Market and its players.

Due to Onalytica IoT is a huge industry, with 150 million smart appliances currently available for consumption. And it is a growing industry with a lot of potential in the B2B- and the B2C-segment. Security-, network- and management systems are essential for digitalization and will need to be updated in a lot of companies that focus on IoT. As Network World point out, an industry like the Internet of Things will always need to evolve, to keep up with consumer needs. This may mean increasing machine to machine communication in all spheres of manufacturing.

For its IoT-study Onalytica wanted to find out, which individuals, brands and publications were leading the social media debate around IOT. With its influencer relation management software the company analyzed over 10.8 million tweets mentioning the key words: IOT or “internet of things” or internetofthings from Jan 1st – June 7th 2017. This helped to identified the Top 100 most influential individuals, brands and publications leading the current discussion. Individual influencers are numerous and act in various job positions – either in companies or self-employed, they are anyalists, consultants or specialists in different fields. Media are important influencers for the IoT-market as well. Onalytica lists Forbes, IDC, ZDnet or IDC – which are only some examples from their list. Leading and influencing brands on the Onalytica-list of the Top 100 are big companies and organizations that act worldwide and in different markets and industries.

More Information to the IoT-influencer list, the data or the interconnections between the influencers can be downloaded here