Home / Blog / Connectivity / Is this really the 21st

Is this really the 21st century of Technology?

Water is a precious commodity in California as we are dependent on seasonal rainfall and melting snow from the mountain ranges to supply a very thirsty state – not only for personal use but for commercial and agricultural use. When the needed amount of water is not realized, things dry up pretty quickly and the danger of fire rises dramatically. This last week was no exception as the fire season started all too early with a number of broad and fast moving fires in the San Diego area which although wide spread, were eventually contained through the heroic effort of numerous CALFire Teams. 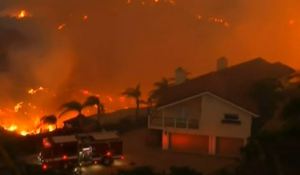 The fire fighting teams rely primarily on the use of radios to communicate with other teams both on the front line of the fire as well as with public safety teams to communicate the fire’s locations, projected movement based on wind direction as well as the immanency of danger to residents. A co-worker was telling me about how she was informed to evacuate her home – basically the police drove through her neighborhood and announced the orders over a loud speaker. It was effective but not exactly what one might expect in the 21st century of Technology.

I am not a fire fighting expert so consider these ideas against that backdrop – but what if the fire fighter had connectivity to say, UAVs with cameras that gave them a real time aerial view of the fire? Would this help them in their efforts to attack the blaze at the right location to minimize its advancement? Similarly would this enable more efficient notification of residents and business about the proximity of the fire in relation to their homes?  UAVs are typically lighter and easier to deploy than piloted aircraft and could provide much needed fire information faster to both civilians and fire fighting teams by ‘pushing ‘ the data to end users rather than waiting for the data to be downloaded.  The net benefits of this situation could enable faster mobilization of teams as well as notifying residents sooner to allow them more time to collect their essentials  prior to evacuation – and oh, by the way- this could also save more water if the fire is attacked and extinguished sooner.
Be safe this summer and stay connected to receive or provide that much needed information about wild fires.

What do you think about my idea of “connected” fire fighters?