Scouring through reports of the recent Mobile World Congress in Barcelona, Spain it is easy to see that The Internet of Things (IoT) was a “driving” force at the show. Indeed, many of the abundant IoT products, services and applications on display were automobile-centric.

Applications ranged from personalized car keys that limit a car’s speed or the volume of its stereo system, to apps that help drivers parallel park. The automobile industry, which manufacturers what are essentially “second homes” to many people worldwide, has been an IoT leader for years and continues to be an incredibly fertile testing ground for creative applications.

However, the automobile is far from alone in the IoT-sphere. MWC 2014 offered proof that, one day, everything that can be connected, will be.

Other notable apps included chip-equipped toothbrushes that help people brush well or keep track of their children’s brushing habits. A sensor-filled athletic shirt that monitors players’ heartbeats as they dribble, shoot, ski, etc. also holds promise for the athletically inclined. Health tracking devices and apps are a key IoT market. The consumer gear was accompanied on the show floor by M2M and commercial applications that were just as intriguing. 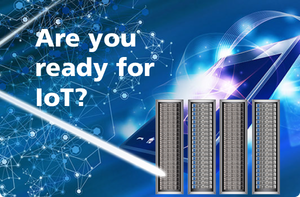 Of course, there is still time before everything is connected, but MWC 2014 was a very strong indication that serious momentum is building. However, inserting chips and sensors into devices and figuring out creative ways to leverage that connectivity is only part of what needs to happen for the IoT to truly come alive. The great thing about what’s taking place now is the fact that all kinds of companies, both large and small, and from all walks of technology are working closely together to disrupt the future, in some cases, even their own. It takes a village to create an interesting application, and many villages already are teeming with activity. The IoT does not belong to anybody. It belongs to everybody.

If there is any urgency at the moment, it is stemming from the need for current players to work together to bring an abundant new mix of companies aboard the IoT ship. The more companies that get involved and diversify the ecosystem, the better the IoT will be for all involved. Meanwhile, any companies that think they can turn a blind eye to IoT are in for the shock of their lives, in very short order.

With all the variables required to create a healthy IoT playing field, there also is great demand for a robust, flexible infrastructure that will support that field by facilitating easy connections and prompt payments for services. If you thought mobile phones and video caught the communications industry by surprise, wait until billions of “things” start churning out orders 27×7. Soon, the IoT will be dictating its infrastructure requirements to us. The IoT and its applications and services have great need of state-of-the-art microprocessing equipment such as the Kontron SYMKLOUD Series of high-density cloud infrastructure platforms. They were specifically designed to deliver the increased efficiencies that will make it possible for telecom and/or cloud service providers’ data center networks to handle the unprecedented workloads that the IoT will create. The demand is now; SYMKLOUD is ready.

Is your network infrastructure prepared to scale with new workload volumes? Still relying on legacy rackmount hardware? What are you seeing in the IoT space?