What makes a city smart? There are quite some angles to this idea. It usually covers sustainability, energy conservation, infrastructure and traffic, but also energy efficient buildings, health care and emergency services. The intelligent systems for smart cities will be relying on embedded systems – they are the glue that keeps various systems together.

More than half of the world’s population lives in urban high density areas, in Europe it’s two thirds already. Although cities only take up two per cent of the planets space, they are accountable for more than seventy per cent of CO2 emissions. There is a definite trend towards mega cities (an urban area with more than 10 million inhabitants) – Shanghai as the biggest mega city for instance has a population of 23 million people. The pressure to modernize infrastructure is growing: Smart city concepts that are based on information technology can be an answer to these challenges.

What makes a city smart?

In the meantime the number of global smart cities is expected to quadruple from 21 in 2013 to an estimated 88 in 2025, states a report from IHS Technology. “Smart cities encompass a broad range of different aspects, but IHS has narrowed the definition of the term to describe cities that have deployed—or are currently piloting—the integration of information, communications and technology (ICT) solutions across three or more different functional areas of a city,” said Lisa Arrowsmith, associate director for connectivity, smart homes and smart cities at IHS. These functional areas include mobile and transport, energy and sustainability, physical infrastructure, governance, and safety and security. 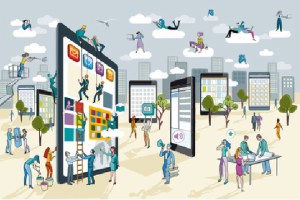 Politics is to promote smart technology

Smart cities will become an economically important factor – beyond pilot projects – during the next 15 years: That’s what 67 per cent of the 1.300 VDE member companies are thinking. According to a trend report by the German organization Verband der Elektrotechnik, Elektronik und Informationstechnik, 61 per cent of the companies estimate that smart cities will strengthen the competitive capability of Germany as an industrial location. On the other hand only 28 per cent are convinced that the German industry will be the leading provider of smart city technologies. Six out of ten companies are still undecided in this question. This is a clear indication that politics should address the opportunities in a better way and create incentives for education and economy to become involved in this area. The report indicates that the biggest challenges for smart cities are mobility concepts, energy and traffic infrastructure, but also IT Security.

Throughout the world initiatives for smart cities are forming and projects are taking place. One example is the SmartAmerica Challenge with a focus on transportation. The Silicon Valley hub, which partnered with Intel for the SmartAmerica Challenge, started by installing air quality, sound and traffic sensors in strategic areas across the city. They monitor the quality of the air, noise pollution and traffic flow throughout San Jose, and identify problem areas for the city government. The sensors are wirelessly connected to central servers, which rapidly process the data for city officials to analyze. In the European Project CLINES four regions, including Bavaria, try to develop a sustainable, well-organized European key technology inter cluster. The goal is to increase the coordination of trans-regional innovation investments and ensure an efficient development, exploitation and dissemination of ICT in the Smart Cities / Embedded Systems domain.

On this year’s conference “Smart City Event” in Amsterdam, Neelie Kroes, Vice-President, Commissioner Digital Agenda in the European Commission, said: “Smarter cities are a great example. Every city already generates huge amounts of information, for many different purposes. But too often that information is lost. It’s time to get smart and start using it”. In order to accomplish the goal of sustainability and energy efficiency, there still remains a lot to do. When more and more sources of information, like sensors, traffic cameras or data from inside the new “connected car” have to be integrated and analyzed in real time, embedded systems will become even more important. Standards still have to be defined to leave the domain of proprietary protocols behind. “As each global and local application in rail, road, air and shipping traffic demands specific computing technology it’s especially important to offer commercial off the shelf embedded solutions. They have to be certified, validated and adaptable to various tasks in order to help OEMs develop applications more easily. Developing, engineering, certifying and manufacturing through a single source guarantee the highest quality and ensure that standards are being met”, says Robert Negre, Business Line Manager Transportation at Kontron.