These are heady, head-spinning times in telecom. And one of its milestone moments is hitting right this week with the Big Telecom Event in Chicago, June 17-18. Ironically, this is the same city that used to play host to the good ol’ Supercomm shows and their subsequent iterations that followed, until of course, they finally sputtered and disappeared altogether in 2010.

Since then the telecommunications industry has undergone considerable changes, but none more than with the recent movement for Network Functions Virtualization (NFV). Barely two years in the making, NFV is an official concept created by a consortium of service providers to virtualize various network functions (applications). It will enable communication service providers (CSPs) to transform their networks in a big way. Inspired by today’s cloud computing market, it is a technology to achieve greater service agility and leverages the cost efficiencies of commercial off the shelf (COTS) hardware, virtualization and open software.

Make no mistake about it. While this, at first looks, is in fact very cloud (data center) driven, the goal is to use NFV just as easily at both core and edge networks, and even to access devices, and still use COTS platforms to easily scale up and scale down workload capacities. What this means is a monumental network transformation from proprietary infrastructure hardware to a software-based version running on standard IT servers.

The NFV adoption rate by CSPs will still take years and will be initially rolled out in smaller trial phases, but the ball is definitely rolling. Many challenges still need to be worked out, such as creating standards on how to manage the orchestration of multiple virtual functions, and how to take into account the compatibility with existing networks.

But, back to BTE in Chicago. Hosted by Light Reading and Heavy Reading, many of the industry players will be there this week to address these topics, and much more. As NFV is at the crossroads of telecom and cloud, this positions Kontron and its Symkloud platform perfectly into the mix. Among the many types of Use Case applications being considered for virtualization, one major category of functions are those fueling content delivery networks (CDN), specifically video content and streaming media. This is something CSPs struggle mightily with on a global scale. 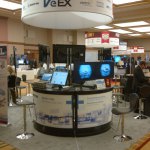 Together with ISV partner Vantrix, Kontron will demonstrate two high performance solutions that are based on the Kontron Symkloud platform and are NFV ready for mobile, cable and cloud operators.

One involves video transcoding and optimization, and the other a data analytics solutions based on mobile operator video logs. One key common denominator is OpenStack, the open source software to provision virtual instances across massive clusters of compute resources. It’s the only available video transcoding solution that uses OpenStack to orchestrate virtual HD graphic instances via the Intel® Core™ i7 processor series, and forms the basis of a possible NFV-based Transcoding-as-a-Service offering.

NFV is a much bigger topic than one blog article can possibly accommodate. Other issues include how to build in low latency and guaranteed carrier grade service uptimes (5 9s reliability); and, how to leverage the advent of software defined networks (SDN). So stay tuned, there is more to come.

Are you involved in assessing the merits of NFV (and/or) SDN trials? What issues or benefits do you see? Attending BTE? Pass by the Innovation Zone and see how Kontron can fit into your plans.