Team Ecurie Aix in the Formula Student: At the forefront of innovation in driverless cars 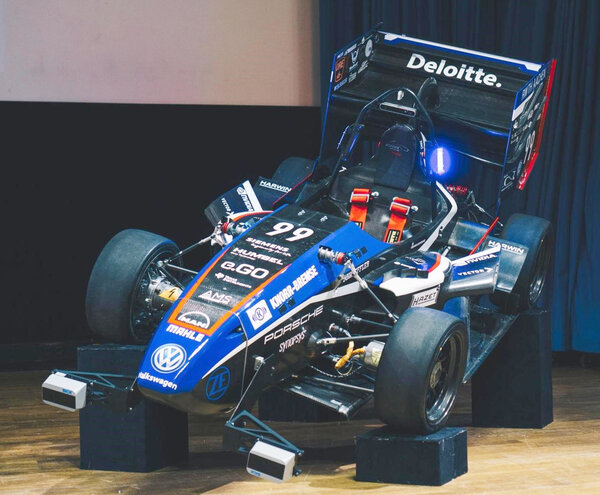 Autonomous driving is not only on the minds of car manufacturers, but also of students of many disciplines who are preparing for a career in the automotive industry. In the international design competition "Formula Student" they compete and exchange their ideas. The Ecurie Aix team at RWTH Aachen University uses a Kontron Mini-ITX industrial motherboard in their current racing car. It will be supported by Kontron's sales partner Aaronn Electronic.

There is an old saying that can already be found in the dictionary of the German language created by the Brothers Grimm, meaning „trying is better than studying“. But things change. "Trying" and „studying“ are no longer incompatible; on the contrary, they can be perfectly combined. The best proof of this is the "Formula Student", an international student design competition in which over 500 teams from all over the world take part. One of the most long-standing participants from Germany is the Ecurie Aix team of RWTH Aachen University, founded in 1999.

In the competition, student teams design and construct their own racing cars within a season, which have to prove themselves both on the race track and in several additional categories before the strict eyes of a jury. In addition to the theoretical knowledge gained from lectures and seminars, the participants gain valuable practical experience. This is also appreciated by car manufacturers. They actively support the competition, which is now the largest and most important of its kind.

Since 2014, Ecurie Aix has been taking part in the competition exclusively with electric vehicles, and since 2017 even with two vehicles a year - one driverless and one with a driver. The team consists of 60 to 70 students from different disciplines - mechanical engineers, computer scientists, electrical engineers and industrial engineers. It's not just about building a functioning vehicle, it's also about organizing the team, procuring materials, negotiating with suppliers and sponsors - and all this in addition to the regular studies.

In recent years, the competition has become considerably more professional and is now at a very high technical level. The rules and regulations for participation are currently 130 pages long. Much of it serves safety, but apart from that it is quite freely designed despite the large volume, because the aim is to promote the widest possible range of solutions.

Of course, each participating team wants to win races, but also the occupation with the practical problems and the cooperative exchange with the other teams is a gain in experience. This is also the view of the manufacturers, who observe the competition very closely.

A competition with driverless vehicles was added three years ago. Ecurie Aix is already competing in this category with its third model in the 2018/19 season. In the Driverless competition, software plays an even bigger role than in the Driver Competition. The route must not only be recorded and assessed via sensors, but the best possible route and driving behaviour must also be calculated and the necessary control commands transmitted to the vehicle.

Decision for the mITX-CFL from Kontron

In previous years, the necessary software for this ran on an NVIDIA embedded system. "In autonomous driving, the software works a lot with optimization processes. In addition, everything should be calculated in real time if possible. If only one calculation loop is added to the improvement, this leads to a significantly higher requirement of performance power," explains Sebastian Lossen, Technical Team Leader Driverless at Ecurie Aix.

His team has therefore decided to build a modular system as the basis for the software of the eace07.d, the current model of their racing car. The operating system is the hardware-related programmable Ubuntu. Compact design and performance efficiency were the basic requirements when selecting the hardware.

Ecurie Aix finally found what they were looking for at Kontron. Its Mini-ITX industrial motherboard mITX-CFL-S not only offers the required flexibility in terms of CPU and RAM. It was also convincing due to the large number of interfaces, including three Ethernet ports, four RS232 ports and many USB ports.

Based on past experience, the close proximity to the manufacturer was also important to the racing team. The student team's request was passed on by the manufacturer Kontron to its trusted distributor Aaronn Electronic. They not only took care of the delivery of the boards, but also the RAM assembly. They also support the students in adapting the drivers.

"We were very happy to accept the request from Aachen," says Alexander Squarra, Account Manager at Aaronn Electronic. "We have many years of experience in supporting industrial customers from system analysis through product selection and prototype development to series production. Being able to accompany the Ecurie Aix team in the construction of a driverless racing car is also a great opportunity for us to deal with future issues and help shape innovations.“ Squarra therefore hopes for a long and successful cooperation with Ecurie Aix.

Aaronn is also open for cooperation with other student teams and start-ups. "At the age of 25, our company is just the right age," smiles Squarra. "We have a lot of experience with embedded PCs of various designs, industrial display solutions including various touch technologies and 19" rackmount servers, but we are not too old not to be enthusiastic about new application ideas - according to the motto: Trying is better than studying".

The partnership between Kontron and Aaronn Electronic

Aaronn Electronic GmbH in Puchheim near Munich has been one of Kontron's most successful sales partners and system integrators for embedded systems for many years. The cooperation between Kontron and Aaronn has existed for more than 20 years, during which time the partners have jointly implemented a large number of customer projects. Thanks to Kontron's extensive portfolio of hardware, software and service solutions and Aaronn's expertise and flexibility, the partners achieve the optimum of possibilities for each individual customer application.

In 1999 students of the RWTH Aachen had the idea to found a Formula Student Team. Already in the following year the plan was realized with Ecurie Aix. The name of the team is a tribute to the nearby race track Spa-Francorchamps and is composed of the French word for racing team, Ecurie, and Aix-la Chapelle, the French name for Aachen. In 2002, Ecurie Aix was one of the first German teams to participate in Formula Student. Since then, new cars have been built every two years. In 2010, the team started at the new Formula Student Electric with its first electric cars. Since 2014, Ecurie Aix has exclusively been building racing cars with electric drive, and since 2017 also electric cars for the autonomous competition class.

eace07.d is the driverless racing car of the team Ecurie Aix of the RWTH Aachen in the season 2018/19 of Formula Student. Its electric gearbox with 1300 Nm allows it to accelerate from 0 to 100 km/h in 2.5 seconds. It has four wheel hub motors in connection with planetary gears, which are accommodated in the wheel carriers. The steering and braking actuators, which replace the driver, enable a change of direction via a servo motor, which brings a maximum steering torque of 23 Nm directly to the steering column via adjustable steering gears. Safety is ensured by a braking system with a "pneumatic muscle" with working air pressures of up to 8 and accumulator air pressures of up to 200 bar.

Partial view of the car with logo

During the 2018/19 racing season, the Ecurie Aix team at RWTH Aachen University will be using an industrial mITX board from Kontron in the Formula Student and will be supported in the implementation by Kontron's sales partner Aaronn Electronic. 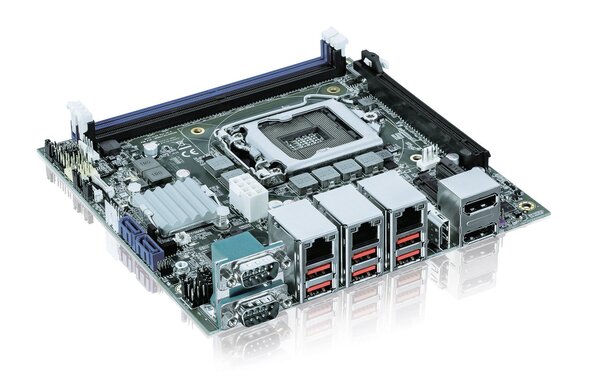 The Kontron mITX-CFL-S became the heart of the driverless racing car eace07.d of the team Ecurie Aix of the RWTH Aachen in the Formula Student thanks to its compact design, high performance efficiency, its numerous and manifold connections as well as the possibilities of the modular design.