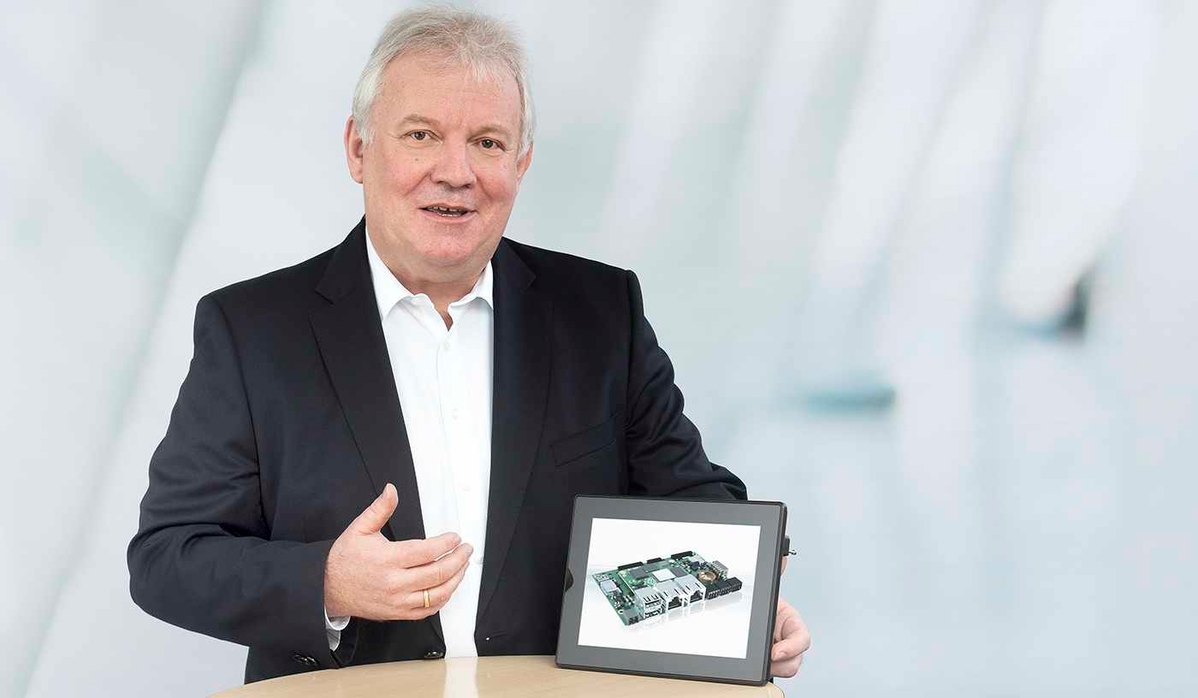 Based on an article from Tobias Schlichtmeier, Weka Fachmedien. Holger Wußmann, Managing Director of Kontron Electronics, on the advantages of the Raspberry Pi and the new product Pi-Tron CM4 that will be presented at the Embedded World.

HOW DID RASPBERRY PI ESTABLISH ITSELF IN THE INDUSTRIAL SEGMENT?

WHAT IS THE MAIN SELLING POINT FOR USING RASPBERRY PI PRODUCTS?

Holger Wußmann: The size and strength of the Raspberry Pi developer community speaks for itself. All of the software from the Raspberry Pi community can be used with our Pi-Tron devices, thus on industrial hardware. With a large pool of precompiled program packages available, developments no longer have to start from scratch. This saves an enormous amount of time. The Pi-Tron CM4 also only uses components that are supported by the community software. The Pi-Tron CM3+ and Pi-Tron CM4 can have the option to be provided with SoftSPS CODESYS® software. This makes it possible to develop any application that requires programmable logic control.

HOW DID THE DEVELOPMENT OF THE PRODUCT LINES PI-TRON CM3+ AND PI-TRON CM4 GET STARTED?

Holger Wußmann: Due to the large demand, we initially developed the Pi-Tron CM3+ based on the CM3+ Compute Module of the Raspberry Pi Foundation. We produced about 10,000 pieces per year and were able to acquire many new customers. With the release of the Compute Module 4 (CM4), it was clear to us that we would introduce the Pi-Tron CM4 as a new product. The plug-in module with a proprietary form factor and the same pin layout is new. The Foundation has moved away from SO-DIMM.

WHAT ELSE IS NEW WITH THE PI-TRON CM4?

Holger Wußmann: The new Pi-Tron CM4 is based on the fourth-generation Compute Module and features the Broadcom BCM2711 4x Arm® Cortex®-A72, 64-bit SoC @1.5 GHz, a significantly faster processor than the previous generation. Depending on the version, the board has significantly more working memory and also offers the option of a pre-certified WLAN/Bluetooth connection. For the integration in IoT applications, Pi-Tron CM4 has been designed to use LTE modules with SIM cards and an external antenna connection. The Pi-Tron can be mounted in a housing, in a control cabinet or can be completely integrated directly in an industrial application. The options are endless.

WHAT ARE PI-TRON PRODUCTS USED FOR?

Holger Wußmann: The Pi-Tron is making its way into automation and is a real PLC alternative with the CODESYS software. It replaces proprietary controllers and data loggers and can be found in edge gateways and building control systems. With the CM4’s newly introduced HDMI interface, Human Machine Interfaces (HMIs) can be managed. The Pi-Tron CM4 also has a LVDS interface and can be connected to a wide variety of conventional LVDS displays. Pi-Tron is sold as a ready-to-use standard device. Starting at batch sizes of 500 pieces, upon request, we will develop customized circuit boards.

WHEN WILL THE NEW PRODUKT BE PRESENTED TO THE PUBLIC?

Holger Wußmann: The first prototypes have already been manufactured and are in the EMC laboratory for approval. The Pi-Tron CM4 will be presented to the public at Embedded World. The start date for series production is planned for the third quarter, subject to on-time delivery of the required components.

HOW ARE YOU OVERCOMING THE CURRENT CHIP SHORTAGE?

Holger Wußmann:  We are constantly in contact with our customers and coordinate everything very closely together. Our teams are currently facing major challenges, especially with the new information that has to be processed on an ongoing basis. We all do our best to meet the wishes and requirements of our customers. At the moment, this is not an easy task. The supply bottlenecks are presenting us with major problems. It only helps if customers order early, with lead times of a year or more.

ARTIFICIAL INTELLIGENCE IS ADVANCING FAST. DOES THE PI-TRON CM4 OFFER ANY OPTIONS HERE?

Holger Wußmann: Originally, it was not intended for use in AI projects, but it can nevertheless form a good starting point. With the M.2 interface, the Pi-Tron CM4 can be expanded as desired, for example with AI modules. Kontron offers the Google Coral chip for this purpose and is working together with the Israeli AI specialist HAILO. Thus, we can build executable AI applications and offer customer-specific developments upon request.

The complete original text of the interview (only German) can be read here: Link to the article