As mentioned within my last blog post, nearly every important market researcher and analyst agrees to the following: hybrid technology will be one of the main drivers of the digital transformation. The reasons for this are obvious: Big data, the Internet of Things (IoT), and mobility will most likely lead an explosion in the use of hybrid clouds. Because as the number of sensors, applications, mobile devices and the use of social media increases, there will also be a tremendous growth of mobile, structured, and unstructured data. The hybrid cloud will provide an ideal platform for these major trends. 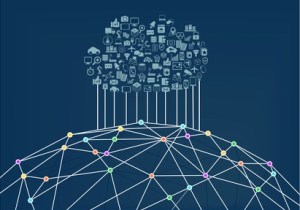 Currently there is no question, that hybrid cloud environments offer a better and safer solution for end-to end enablement of IoT deployments than the public cloud. But in the course of this, companies now have to face the question which architecture will bring better scalability, improved rackspace density, reduced power consumption/cooling requirements and flexibility. A new architecture which is driving the scalable IoT hybrid cloud is the converged modular server. This new breed of commercial-off-the-shelf (COTS) modular server hardware incorporates the best characteristics of rackmount and blade servers, integrating high-density compute, storage, and network switching into one platform.

Compared to a traditional server using a scaled-up processor such as the Intel Xeon processor E5 with up to 18 cores, converged modular servers are reaching into the many core realm to deliver denser, more flexible compute resources. For example, the Kontron SYMKLOUD Series currently packs up to 36 Intel Xeon processor E3 cores or up to 72 Intel Core i7 processor cores in a 2U enclosure – leading to perhaps 756 or 1512 cores in a 42U rack. Near term, these new processors will push core counts over 100 per 2U. And of course, this framework introduces many new possibilities for partitioning a server for an optimized IoT infrastructure use. Here are some of the most relevant advantages:

And a hybrid cloud approach to IoT infrastructure featuring modular servers also helps free application developers from many other boundaries:

If you want to learn more about converged modular servers, you can also read the Kontron Whitepaper “Powering a scalable, hybrid cloud for IoT infrastructure”.

Are you already modernizing your in-house applications and making them “cloud ready”? And if so, are there a lot of technical and compliance-related hurdles to overcome? Tell us about your experiences with hybrid cloud environments (maybe even converged modular servers) by leaving a comment!