The CompactPCI serial standard is an evolution of the existing PICMG 2.0 specification, which is characterized by serial communications over the backplane. Supports expansion cards, which can either be connected via Ethernet, PCI Express, SATA or USB. In specification-compliant system enclosures while any combinations of such cards are pluggable, which are directly supported up to eight. Bridges also on appropriate solutions with a significantly greater number of expansion cards can be implemented. This high flexibility in the design allows implementing very different system configurations: 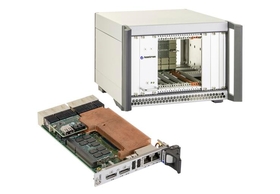