Only three years after the original release, Version 2.0 of the Smart Mobility Architecture (SMARC™) embedded computing format was announced by Standardization Group for Embedded Technologies (SGET) SDT 0.1 earlier this year. Its specifications provide an enhanced pinout to better accommodate customer needs and processor interfaces, matching the original 2013 standard for low-profile form factor modules. You might call this the SMARC Evolution.
SMARC™ was born out of the necessity for further development of Computer-on-Modules (COMs) standards for energy-saving ARM System on Chip (SoC) processors. Subsequent development at Intel that allowed x86 architecture products to benefit from SMARC™ as well led to the emergence of the modules as scalable building blocks, making possible an entire new generation of embedded computing applications.
Today, SMARC™ is being used for automation solutions, image-centric devices that require low energy consumption and the ability to handle extreme environmental conditions, small portable handheld devices as well as larger devices with high computing power requirements.

Our contribution to SMARC

Kontron has been a part of the development as member of the SGET, completed the original specification in 2012 and launched its first highly scalable SMARC™ module families the same year.
The smooth ratification shows Kontron’s power to innovate as a technology leader and a ‘standardizer’ of COMs with more than 15 years of development experience. Our COMs success story began in 1998 with DIMM-PC®, followed in 2000 by the global licensing of the ETX® standard. The X-board® specification came in 2002 and ETX Express® as the technological basis for PICMGs® COM Express® technology was launched one year later. COM Express® was developed by members of the PICMG® standards consortium to which Kontron was a major contributor. Over the years COM Express® has been adapted to meet the increasing need for miniaturization on a high-performance level: COM Express® basic was complemented by the smaller COM Express® compact and in 2008, Kontron introduced the technological basis for the credit card sized COM Express® mini.
In February 2014, Kontron revealed the world’s first ultra-low-power SMARC™ COMs with Intel® Atom™ E3800 processors. With only ARM processors available at the time, the release opened up new possibilities for developers in terms of scalability, software re-use and compatibility. 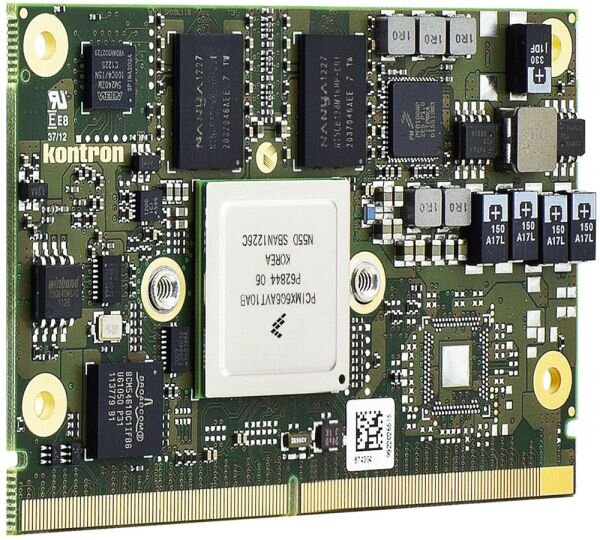 SMARC-sAMX6i: an ultra-low power ARM and SoC based SMARC module by Kontron

Now firmly established, Kontron’s SMARC-sXBTi offer excellent graphics, high processor performance and x86 compatibility on the smallest SMARC™ footprint, with a power consumption of only 5 to 10 watts. Both the flat profile of the module and its mobile feature set are designed for the smallest handheld devices, but can be deployed in any scenario where high-level computing and graphics performance must be achieved on very few watts.

The need for a new version

Let's take a step back to see why changes to the standard were necessary. Utilising the proven Mobile PCI Express Modules (MXMs) edge connector, SMARC™ was originally established to define two sizes of modules – a full-size module that measures 82 by 80 mm, and a short one for more compact systems with 82 by 50 mm. Other than the PCI Express focus of COM Express, SMARC™ was flexible enough to handle different types of video and graphics output, serial buses, general purpose SPI, client and host forms of USB, serial and parallel camera interfaces, and support for standard flash-memory card formats such as SD and eMMC.
However, Intel subsequently improved the power efficiency of its processors and started using SMARC™. The SMARC™ connector’s 314 electrical contacts now need to support and provide compatibility with not only ARM but with x86 as well.

SGET has responded by updating and modifying the original specification based on feedback from developers and users. Some interfaces which were rarely used have been removed, including the Parallel Camera Interface, Parallel Display Interface and PCI Express Presence.
Throughout this process, the goal has been to create a new pinout version while maintaining compatibility with the V1.1 pinout as far as possible. Accordingly, previously under-utilized V1.1 pins were re-purposed for accepting new interfaces, with the guiding idea to make possible placing a V1.1 compliant module into a V2.0 compliant carrier and a V2.0 compliant module into a V1.1 compliant carrier.
New interfaces include 2nd channel LVDS, a 2nd Ethernet port, IEEE1588 Trigger Signals, a 4th PCI Express Lane, extra USB ports (now up to 6x USB 2.0 + 2x USB SS signals), x86 power management signals, eSPI and DP++.

Finally, the new version has three digital displays: 2x 24 bit LVDS or eDP (4 channels) or MIPI DSI (4 channels) can be used as primary display; the secondary can either be HDMI or DP++; the third DP++.

SMARC™ 2.0 will be the basis of many innovative applications and Kontron intends to remain at the forefront of this development: Version 2.0 product introductions are scheduled for late 2016 and these, like all current Kontron embedded boards and controllers, will be Internet of Things ready and benefit from deep software integration.